From one coach to anther, Sheri was the best one!

“I just had my session with Sheri, it was wonderful! After one night of her help, I woke up with even more creative ideas. Sheri did for me what I do for my clients, which is to show the bigger possibilities and go forward to reach my goals. From one coach to anther, Sheri was the best one!”

I would not be where am without Sheri’s support and guidance.

"Sheri has helped me make a big shift in my career and finances. When we started working together, I was underearning and in an overwhelming amount of debt, which was only getting deeper. I felt hopeless that I would ever get out from under it, let alone be able to retire with some money in the bank.

The past year has been the biggest change. Two years ago, the debt paralyzed me so badly that I couldn’t even say or write the number of the amount I owed. With Sheri’s encouragement and example, and with the counsel of a financial advisor, I am finally facing my fears around my finances.

After carrying the debt for almost 20 years, I am on a seven-year track to have it paid off in full. I learned from Sheri that it’s never too late to start. If all goes well, I will be 60 when I finish paying my student loans. I can’t believe there is a light at the end of the tunnel.

Seeing Sheri owning a home, financially secure and able to retire if she desired, and sharing with me that her path to retirement was not a straight one, has inspired me.

In the time that we have been working together, I have moved from doing something that I hated—litigation—to having a career in something for which I have a real passion. I went from closing my law firm in 2008 when the economy collapsed to having a C-level position doing something I love and am good at.

Sheri’s support and example have propped me up and opened my mind to being a successful woman in the corporate environment. Having another woman to talk to about the day-to-day struggles I go through working as the only woman on my executive team has been so important. I would not be where am without Sheri’s support and guidance.

My personal growth has improved exponentially while under her mentorship.

"I have sought out growth opportunities with Sheri for the past ten years. She has provided me with direction and guidance to navigate the challenges that I’ve encountered in my life. Sheri is an active listener, which makes her insights thoughtful and on point. She often makes suggestions that help me work towards healing, forgiveness, and next steps.

My personal growth has improved exponentially while under her mentorship. I am deeply grateful to have the time with Sheri, as life is always providing more to examine and grow from. "

If you are looking for clarity, purpose and fun while doing it, connect with Sheri...

"I had a wonderful experience doing this deep, much needed work with Sheri! It reminded me to be kind to myself.

I would recommend Sheri in a second for any woman in a transition in their life who wants to find out her soul purpose. Sheri is compassionate, warm and loving, while having you dig deep to find answers to your soul’s questions. If you are looking for clarity, purpose and fun while doing it, connect with Sheri and her “Reinvention Playbook” today!"

I would highly recommend Sheri to anyone...

"Working with Sheri has been wonderful. It really helped me look at the areas I need to improve and the steps needed to do it.

I would highly recommend Sheri to anyone considering working with her, as she has modeled what she teaches. She has created a life for herself that is fulfilling in all areas. I want that also. She is my dream mentor."

Working with Sheri helped uncloud the path ahead...

"Working with Sheri helped uncloud the path ahead. It’s still a wooded forest, but it’s not foggy or dark.

Sheri is probably the most loving and tough person I have ever had the pleasure of knowing long term. Don’t ask her if you’re not ready to hear it. Because after that, she’ll gently remind you until you’re either ready, or tired of hearing her say it with her beautiful chuckle afterwards." 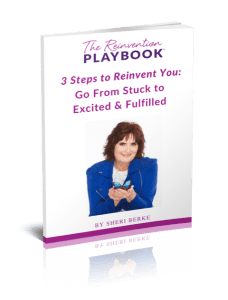